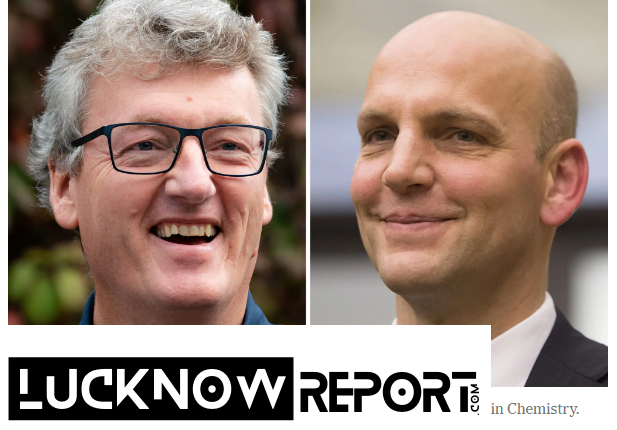 Carolyn R. Bertozzi, Morten Meldal and K. Barry Sharpless were honored for their advances in “click chemistry,” which has played a role in treating and diagnosing illnesses.

Nobel time! And this year it’s a prize that has been predicted by many people for some years now: “click” reactions and bio-orthogonal chemistry. The winners are Carolyn Bertozzi of Stanford, Morten Meldal of Copenhagen, and K. Barry Sharpless of Scripps – La Jolla (his second chemistry Nobel!) This is a subject that’s near to my heart, since I’ve run many of these reactions myself, because they’re fundamental tools of chemical biology (my current field of research), and because I know several of the researchers in this area personally. Here’s the Nobel committee’s scientific background on the award, which is very well done, as usual.

Let’s start out with the concept of “click chemistry” in general. That was an idea from Sharpless and co-workers that developed in the 1990s and was the subject of a widely-read article in Angewandte Chemie in 2001. A “click” reaction is one that takes place very quickly and cleanly between two different functional groups. The absolute ideal would be Functional Group A, which reacts with nothing else in the world except Functional Group B and vice versa, and immediately does so irreversibly to make a new stable structure when the two encounter each other, without the need for other reagents or any sort of strenous conditions. Reactions that approach this ideal are some types of cycloadditions and also ring opening of strained heterocycles, and a step or two behind those are some Michael reactions and other additions to alkenes or alkynes, some other nucleophilic displacement reactions, and some carbonyl condensations. If you’re a non-chemist and have little idea of what those things are, don’t worry about it – it’s the “quick and clean” idea that’s the key.

Why is this stuff interesting or useful? There were quite a few people asking just those questions twenty years ago, as I well recall. “Yeah, sure, some reactions are faster than others, or go without us having to beat on them – so?” is one general response, summed up. But Sharpless’ insight was to realize what some optimized click reactions could provide, which was a universal, modular way to build up molecules of all sizes. The analogy is often made to Lego blocks or Velcro, and it’s a good one (particularly the latter, which gets across the orthogonality of the reactions). You had to let your imagination roam a bit to start to see the possibilities, many of which were outside how synthetic organic chemists tended to think at the time, and we’re going to see some of those applications further down the page. But first, the reaction that became almost synonymous with click chemistry: the azide-alkyne cycloaddition.

This is part of a large group of 1,3-dipolar cycloadditions, a field that is itself synonymous with the work of Rolf Huisgen. Several of these reactions had been known, but Huisgen figured out their common features and extended the field greatly in the early 1960s. Azides are one of these 1,3-dipoles (there are many more), and it was already known that they could indeed react with “dipolarophiles” such as alkynes (carbon-carbon triple bond compounds) if you just heated them up together, giving you a stable five-membered 1,2,3-triazole ring. Not that many people ever did that – heating up azide compounds is generally frowned upon, since there’s a real risk of explosion. But that “just heat them up together” reactivity space was where Sharpless and co-workers went prospecting for click-type reactions, and they discovered that the reaction could be catalyzed at room temperature by very small amounts of copper salts. That’s not quite the ideal of no external reagents at all, but it’s pretty darn close.

The same reaction was discovered by Meldal and co-workers in Copenhagen, who were looking for new ways to assemble peptides and peptide-like compounds. That’s an area that was very conducive to thinking about click-style reactions, actually. A huge complex universe of proteins is built up by repeated application of an easy, boring reaction (amide formation), which takes place under mild conditions in the lab and also, of course, in living cells. That 2001 paper from the Sharpless group had made the point that biomolecules and natural products tended to be at least partly assembled by such methods. Here’s the Meldal work as published in 2002, which showed that common peptide structures (and protecting groups) were compatible with the reaction, and extended it to an azido-sugar as well. One of the nice features of this reaction is that the copper-catalyzed system produces almost entirely one of the two possible triazole isomers that you could get from the (more reactive) monosubstituted alkynes, which simplifies life quite a bit. It turned out that the reaction works on a huge variety of azides and alkynes, under very mild conditions, and very quickly. People took notice, and began to take advantage of this stick-things-together reaction across several types of chemistry.

That peptide-and-sugar work from Meldal’s lab highlighted one of the promises of this sort of reaction: azides and alkynes are not particularly reactive by themselves in biological systems. How far could this “bio-orthogonal” chemistry be pushed? One big problem is that the copper needed to get the triazole formation to work so easily at room temperature is also toxic to living cells. And that’s where this 2004 work by Bertozzi and co-workers came in, who coined the phrase “bioorthogonal” to start with. They had been working on various sorts of reactions that might be compatible cellular conditions, and ingeniously, they got the click reaction to work without any copper at all by making the alkyne more reactive. Alkynes themselves are straight lines, physically, and you can’t easily make them be part of small ring systems because they just don’t bend that way – any such structure that forms falls apart or reacts immediately. An eight-membered ring is about as small as you can get away with and still have a stable compound. That makes able to react when it sees a 1,3-dipole compound, and the Bertozzi work showed that “cyclo-octynes” could be introduced into biomolecules and then into living cells, where the click reaction would take place with no copper in sight. Her lab’s interest was in glycobiology (modification of proteins and other biomolecules by carbohydrate residues), and cell-surface carbohydrates reacted happily when modified with azide groups and exposed to cyclooctyne reagents, with no apparent ill effects on the cells themselves. They improved the reaction later by introducing fluorines into the cyclooctynes, making them even more reactive.

All this opened the floodgates. Click reactions (almost always in the form of azide/alkyne cycloadditions) started showing up everywhere, and these examples perhaps demonstrated why some synthetic organic chemists didn’t pick up on the potential at first. After all, discovering a new reaction is not an uncommon thing in organic chemistry, and this one wasn’t even a new reaction per se (just a better way of running an old one). And who really cared about making 1,2,3-triazoles, even if it was now easier? It’s not like there were many natural products with that motif in them, or any real drug molecules, and triazoles by themselves were just one more five-membered heterocycle among a whole list of such things. But that’s like looking at Velcro and saying “Who cares about little patches of fuzzy fabric stuck together – since when has anyone ever felt the need for those?” The point isn’t the little structures that these connections form, the point is what’s around them, what they can connect.

And these triazoles starting connecting everything. You saw them in materials science, in analytical chemistry, in chemical biology (where they became a crucial tool in many applications), and many other areas.

Airtel 5G Plus launched in 8 cities; no SIM change needed