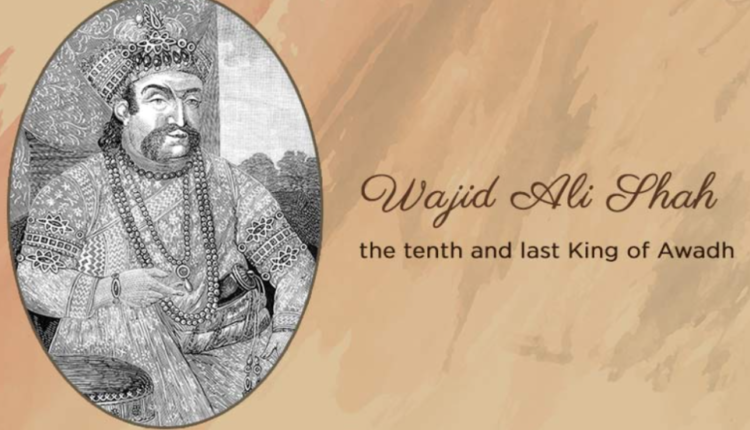 Muhammad Wajid Ali Shah Bahadur was born on 13th February, 1847 in Lucknow, India. He began his illustrious reign as ruler of Awadh after ascending the throne in 1847, which he went on to rule for nine years. After his kingdom was annexed by the British in 1856, the Nawab was exiled to Calcutta where he spent the rest of his life off handsome allowances. However, his immense contribution to the field of Fine Arts is what makes him renowned today.

he robust Nawab Wajid Ali Shah was regarded as being a kind, generous and compassionate ruler, as well as a good administrator, who took keen interest in the affairs of the state. However, his image was tarnished by the British as being a debauched and detached ruler, contrary to the fact that Awadh as a prosperous and wealthy state under his rule. Besides introducing reforms and looking into the administration of justice and military affairs, Wajid Ali Shah was also a poet, playwright, composer and dancer himself, under whose lavish patronage the fine arts flourished.

In his autobiography, Ishqnama (‘Chronicle of Love’, 1849-1850), the Nawab candidly recorded his sexual experiences as well as his ecstatic transports. One afternoon, he writes, while sitting beneath a tree in a garden, he tore off his clothes and stripped down to a loincloth. Smearing himself and his female companions with ash, he became, in this liminal moment, a yogi. The heightened mood grew more enchanted as the assembly went down to the river, evening fell, and fireworks exploded in the sky. The setting of this trance-like performance was Kaiserbagh (‘Emperor’s Garden’), an architectural fantasia that the Nawab designed and constructed between 1847 and 1850 in Lucknow. An earthly version of the paradise garden, it was a complex of palaces, courtyards, gardens, pavilions, tombs, and royal bazaars.

Pursuing his passion for the arts, Wajid Shah built the specatcular Kaisarbagh Baradari palace complex which came alive with music, dance-dramas, Rahas, Jogiya Jashan and Kathak performances, making Lucknow an attractive cultural centre, as made famous by the earlier Nawab rulers of the state. It was during his era that several reputed musicians, poets, composers, and dancers enhanced their repertoire, along with the enriching the light classical form of thumri, the grand revival of the Kathak dance form, and the rise in popularity of Hindustani Theatre. After his deposition to Calcutta, Nawab Wajid Ali Shah longed to keep the pomp and splendor of his beloved Lucknow alive. In his exile in Matiaburj, on the banks of the River Hooghly, Wajid Ali Shah once again used his wealth to relive his former glamorous lifestyle. The adorned walls of the Darbar Hall of Matiyaburj bear witness to the numerous musical assemblies held there, being visited by music-lovers, including great personalities from Calcutta’s music circuit such as Aghorenath Chakravarty, Sajjad Mohammad, Dhirendranath Bose, Shyamlal Goswami and Rai Chand Boral.

Wajid Ali Shah’s self works included numerous poems, prose, ragas, playwrights and ghazals under his pen name of ‘Qaisar’. While his compositions include his famous Bhairavi thumri named ‘Babul mora Chhooto jaay’ sung by many singers, his ragas (titled Jogi, Juhi, Shah-Pasand etc.), dramatised poems (such as Darya-i-Tashsq, Afsane-i-Isbaq, and Bhahar-i-Ulfat) and ghazals (in the ‘Diwani-Akhtar’, ‘Husn-i-Akhtar’), his great works have inspired many artistes and playwrights alike. Nawab Wajid Ali Shah’s personal front was also as ambitious as his passion for the arts, as he took advantage of the Shia Law of Muta to marry an astonishing 359 times. Besides the Nawab’s immense contributions to India, one of his wives, Begum Hazrat Mahal was known to be a great Indian freedom-fighter who played a major role during India’s First War of Independence (1857-58) against the British.

As a Shi’a Muslim, Wajid Ali Shah could marry up to four women in official nikah ceremonies but as many as he liked through temporary mut’ah marriage contracts. He is believed to have married more than 375 women over the course of his life, many of whom were talented, high-class courtesans (tawa’if), whom he named paris (‘fairies’). They lived guarded by African women within the palace in the pari-khana (‘fairy-house’), where the King and the city’s foremost music masters tutored them in music and dancing.

Wajid Ali Shah’s wives are invariably depicted with their hair tightly combed leaving their foreheads bare in the stark British fashion. The painters evidently based their portraits on photographs, probably by the gentleman amateur Ahmad Ali Khan, the King’s court photographer.

Nawab Wajid Ali Shah passed away on 1st September, 1887 at Kolkata, India, while his mausoleum lies at the Imambara Sibtenabad, in Matiyaburj. Great historians such as Dr. G.D. Bhatnagar and Ranbir Singh’s elaborate works and autobiographies, provide us with perspective insight into the Nawab’s life.