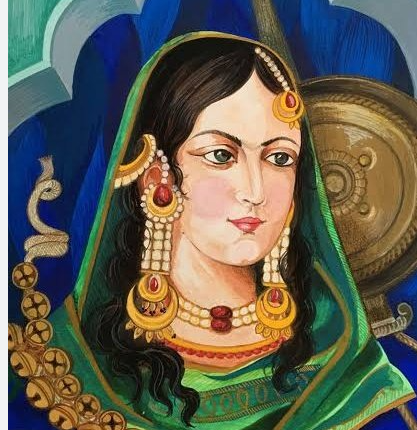 Begum Hazrat Mahal was the wife of Nawab Wajid Ali Shah. She was a real graceful lady, whose beauty had an unbeatable charm. She was also known as the Begum of Awadh.

Begum Hazrat Mahal was one of the few women who challenged the British during the revolt of 1857. Her maiden name was Muhammadi Khanum. She was born at Faizabad, Awadh. Later in life, she performed a mut’ah marriage with Nawab Wajid Ali Shah.

Awadh was annexed by the British East India Company in 1856 and Nawab Wajid Ali Shah, the last Nawab of Awadh was sent into exile to Calcutta. Hazrat Mahal decided to stay back in Lucknow along with her son Birjis Qadir.

After the absorption of Awadh, a rebellion broke out at Meerut and the banner of revolt was raised in Lucknow which spread rapidly to other towns of Awadh. Lucknow was the only place where the English did not leave the Residency building and faced the rebels until they were able to regain their lost power.

Born in an economically disadvantaged family in 1820, Hazrat Mahal was a courtesan by profession. Her maiden name had been Muhammadi Khanum. She was born in Faizabad, Awadh. After being sold to the royal Awadh harem as a khawasin (an attendant), she soon caught the attention of the last Tajdar-e-Awadh, Nawab Wajid Ali Shah.

She was soon promoted to a ‘pari’ (fairy) from a khawasin. Pari meant a group of women (the idea of which was introduced by the Nawab himself) where women from economically disadvantaged groups were trained and educated with different art and performance skills to please the Nawab. They were also considered to be the temporary wives of the Nawab.

She was titled with ‘Mahak Pari’ (fragrant fairy) by the Nawab. She was one of his concubines. The Nawab named her Iftakar-un-Nisa and she became the second wife of Wajid Ali Shah. As soon she gave birth to their son, the Prince of Awadh, Birjis Qadr, she was titled Begum Hazrat Mahal (Royal Queen). But she too was divorced by the Nawab like his other concubines.

In 1856, by the means of the Doctrine of Lapse introduced by Lord Dalhousie, the East India Company annexed the kingdom of Awadh. Awadh as a territory was a great resource for cotton and indigo. They appropriated Awadh on the basis of debauchery and gross mismanagement of revenue.

Nawab Wajid Ali Shah was exiled from his throne and was sent to Calcutta (Metiabruz) with a part of his family in March 1856. Begum Hazrat Mahal and other divorced concubines were left behind in Lucknow. Begum Hazrat Mahal took the charge of Awadh and their 12-year son. Prince Birjis Qadr was officially crowned at the Baradari, Qaisebagh.

She ruled as a regent for 10 months. As a Begum from an enormous royal family, she broke the stereotypes of her gender performances and revolted against the British East India Company in the Great Mutiny of 1857.

During the first war of independence against the British, Lucknow was one of the most bitterly contested constitutions in India. Begum Hazrat Mahal did choose not to succumb to the East India Company. Soon, Queen Victoria, in order to formally transfer the British territory of India from the East India Company to the British Crown made a proclamation – Hazrat Mahal made a counter proclamation and refused to abide by the conditioning.

She motivated the population of Awadh and led a ‘peasants in uniform’ military rebellion in Awadh. It turned into a general uprising of people. She was successful at creating a harmonized equation and established social equality between people of all castes and religion.

The freedom of Awadh was never her only concern. Instead, she aspired towards freedom for India. She used to ride on an elephant and be physically present at the battleground to encourage soldiers against the advancing British troops. Nana Sahib (the childhood friend of Rani Lakshmi Bai) was one of her confidants. She worked in close association with him.

During the 1857 rebellion, Begum Hazrat Mahal was counted as an exceptional woman who opposed Britain. Muhammadi Khanum was her maiden name. Born in Faizabad, Awadh, she was later married to Nawab Wajid Ali Shah at the Mutoa ritual. After the dissolution of Awadh, a protest broke out in Meerut, a flag of rebellion was held up in Lucknow, and it soon spread to other Awadh towns. The British did not go away from the building of Residency Lucknow and confronted the protestors until they could reclaim their lost control. In 1856, the British East India Company seized Awadh, and Nawab Wajid Ali Shah, the last Nawabs of Awadh, was exiled to Calcutta. Hazrat Mahal and her son Birjis Qadir decided to return to Lucknow.

Her role as a freedom fighter

She died in the year 1879 and was buried in Kathmandu, near the Jama Masjid. Her grave was found to be in a very poor condition, which is now under the custody of the Jama Masjid Committee.

She proved to be a far better ruler and leader than the Nawab himself. She was an intuitive politician with incredible military and administrative abilities. There have been accounts of her parents where her father was slave and mother was a mistress, though there are hardly any accounts available of her early life as such.

After being sold to the royal harem, she lived the life of a courtesan. But it is known through oral historical tradition that she dismissed those from her royal audience who were being disrespectful towards her, during her performances.

The demand for dignity was one of the primary things Begun Hazrat Mahal fought for, from her admirers at the court from enemies she fought against. She also mobilized other courtesans to fight on the battlefield and they equally participated in the war against the British.

During the First Indian War of Independence, Begum Hazrat Mahal, often known as the ‘Begum of Awadh,’ was the first female independence warrior. She was a key figure in the first Indian independence struggle, fighting alongside other revolutionaries against British soldiers. However, British soldiers invaded Awadh again and were able to retake it after a protracted siege, forcing her to flee. She refused to accept any of the British authorities’ favours or privileges. She eventually found refuge in Nepal, where she died after some time. She was the only important leader who never surrendered to the British, and she fought the British for the next twenty years of her life in exile in Nepal.

Amidst the hustle-bustle of Lucknow city, Begum Hazrat Mahal Park is a treat for every peace seeker. Located in the downtown of the city, Hazrat Mahal Park is one of the oldest parks in Lucknow. Commemorates the brave wife of Nawab Wajid Ali Shah – Begum Hazrat Mahal, the park is dotted with the abundance of greenery. Once this park was a prominent ground for the celebration Dusshera and other festivities. The complex of this renowned tourist site in Lucknow also includes a marble memorial which was built by the Indian government to honour the contribution of Begum Hazrat Mahal in the mutiny of 1857. At present, the park is serving as a prominent hideout for families for picnicking, kids for playing and elderly people for meditation and yoga.