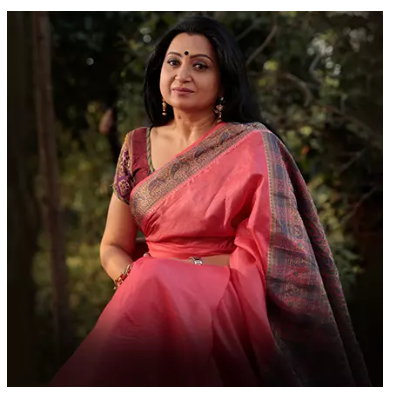 Pali Chandra (née Srivastava) is an internationally acclaimed Kathak dancer, choreographer, educationist, social activist and the artistic director of Gurukul Dubai. She is trained in classical Kathak by the late Guru Vikram Singh, Pandit Ram Mohan Maharaj, and Smt. Kapila Raj of Lucknow Gharana. As a performing artist of classical and contemporary Kathak, she was recognised for her outstanding performance and was awarded the Lachhu Maharaj Award given to artists who acquire the skill and expertise of Abhinaya – Art of expression. She is a former committee member of the Imperial Society of Teachers of Dancing, and a graded member of the Indian Council for Cultural Relations.

Born on 19th November,1967 in Lucknow , Pali started dancing at the age of six following her mother’s wishes who herself wanted to be a dancer but was not allowed to take up dance, became a classical singer. She took up formal training under her guru Vikram Singhe, at the Sangeet Natak Akademi, Kathak Kendra Lucknow at the age of eight after he saw her potential as a dancer. Whilst studying there she was also under the tutelage of Pandit Ram Mohan Maharaj and Kapila Raj who believed in Pali’s talent.

Pali graduated from Avadh Girls’ Degree College, Lucknow in 1987 with a first class honours degree in economics and anthropology. She followed this up with a Master’s degree in anthropology from the University of Lucknow and was awarded the Gold Medal for her research on Tribal Music and Dance of the Gaddi Tribe.

Pali Chandra is known for her contribution to the society and environment and has taken several charity initiatives since 1995. From awareness programs on people with special needs to the homeless of Harrow in UK. From giving company to the lonely in old age homes of Belmont Elderly Centre to dancing with the physically challenged of Aspire, Stanmore, England. And now her focus is Rakum, Bangalore where she [conducted workshops – teaching the blind girls of Rakum to experience dance. She has organised fundraisers in Dubai and Chennai to help with cornea transplants for these little girls. Pali has created several projects to help raise awareness towards the environment as well for example – Ganges to Thames and Continental Shift and is now working towards Green Symphony.

Pali Chandra is a renowned Kathak artist, teacher and choreographer. She is an educationist and social activist too. Her works have been acclaimed internationally, and currently associated with Gurukul dance academy, based in Dubai. She performs Lucknow Gharana of Kathak dance form, and she received training from Guru Vikram Singh, Pandit Ram Mohan Maharaj and Kapila Raj. She has taken several charity initiatives since 1995, and regularly conducts shows and free workshops for underprivileged students and blind.

Pali Chandra hails from Lucknow, Uttar Pradesh. She was born on 19 November 1967. She was initiated to classical dance forms at a young age of six. Her mother wanted to become a classical dancer in her younger days, but not allowed to do so, and she was forced to opt singing. So she supported her child Pali to learn and perform dance on stage. At the age of 8, she joined Kathak Kendra Lucknow at Sangeet Natak Akademi, where she was trained by Vikram Singhe. She identified her potential to become a dancer, and she continued training under Pandit Ram Mohan Maharaj and Kapila Raj. She received a lot of encouragement from her gurus, who believed in her talent.

She completed her academics at Lucknow, where she specialized in anthropology. She completed her graduation as well as post-graduation in this subject. Later she did research on Tribal Music and Dance of the Gaddi Tribe, and earned a gold medal. Currently she serves as the artistic director of Gurukul dance academy, based in Dubai, with branches in Switzerland. She works aside Somna Tugnait training numerous students with Bharathnatyam. She has conducted workshops on Bharatanatyam at Oxford, Birmingham, Liverpool etc.

Once Visit: The Ambedkar Memorial Park In Lucknow